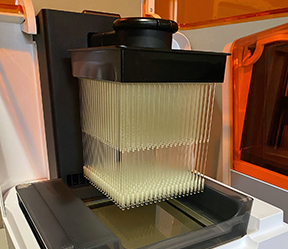 As of April 18th, John Fales, DMD and Kory Kirkegaard, DMD began printing thousands of NP swabs which will be couriered to the lab at the KDHE. The NP swabs are printed on FORMLABS printers, which are specialized medical device printers, using a specialized surgical guide resin and the USF FDA EUA files tested at Northwell. Dr. Fales, a Pediatric Dentist in Olathe, is a member of the KAAP and serves on the AAP’s Section on Oral Health as the liaison from the American Academy of Pediatric Dentistry. Dr. Kirkegaard practices at The Art of Dentistry in Overland Park.

On April 3rd, the KDHE acquired the CEFEID platform to increase testing capacity to 1000 tests a day, but the rate limiting factor was that NP swabs were not commercially available. On April 4th, Secretary Norman asked KAAP President-Elect Kristie Clark MD if she knew of any supply channels to obtain swabs. Soon thereafter, the KAAP put out a call for members to repurpose NP swabs from RSV and FLU kits, and researchers at KU and KUMC scavenged labs for NP swabs.

Dr. Clark reached out to FORMLABS after learning about their collaborative with USF to 3D print NP swabs. After trying other avenues 3D print NP swabs in Kansas, the observation was made that the printers were the same ones used by some dentists to make other medical devices, only modified. Networking through dentists she knew, Dr. Clark was introduced to Dr. Fales and Dr. Kirkegaard. Within a week the dentists reverse engineered their existing printers, acquired additional printers, and started production of NP swabs using FORMLABS printers and the USF files. The KAAP is grateful for the efforts and ingenuity of these dentists which expands testing for Coronavirus in Kansas.